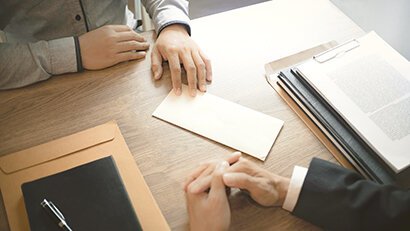 The employee's right to claim remuneration for default in acceptance is, however, restricted by the statutory provisions of section 615 sentence 2 German Civil Code (Bürgerliches Gesetzbuch, BGB) and section 11 German Protection Against Unfair Dismissal Act (Kündigungsschutzgesetz, KSchG). The employee must accept to have credited against them the amount that they acquired from working elsewhere in the meantime, or could have earned if they had not wilfully refrained from accepting reasonable work. Whether the requirements for such crediting are present, however, naturally mostly eludes the knowledge of the employer upon whom the burdens of demonstration and proof lie. The employer’s right to information currently only applies to the actual amount the employee has earned elsewhere, but not to other potential employment opportunities and the income that the employee would have been able to earn if they had started a new job. The employer is unable to assert an objection on the grounds of the employee's wilfully refraining from accepting work as, in practice, there is regularly insufficient evidence that the employee had turned down other reasonable work opportunities and what they would have hypothetically earned.

In the judgment dated 27 May 2020 the Fifth Senate of the Federal Employment Court (BAG, dated 27.05.2020 - 5 AZR 387/19) the employer's rights regarding crediting certain amounts against the employee as envisaged in section 615 sentence 2 BGB and section 11 KSchG have now been reinforced. The BAG recognised for the first time that the employer from whom the employee has demanded remuneration due to default in acceptance, has a right to information regarding the job opportunities the Federal Employment Agency (Agentur für Arbeit) and the Job Centre suggested to the employee according to the requirements of good faith as per section 242 BGB.

The claimant requested payment of remuneration for default in acceptance deducting the German unemployment benefits I and II that they had been receiving since February 2013. The defendant raised the objection that the claimant had wilfully failed to acquire earnings elsewhere. The defendant submitted a counterclaim demanding that the claimant provide written information about the vacancies the Federal Employment Agency and the Job Centre had suggested to the claimant, stating the position, working hours, location and the advertised renumeration in euros.

The BAG allowed the defending employer's claim to information against the claimant and rejected the appeal.
The basis of the information request was the claimant's secondary obligation under the employment contract as per section 242 BGB. The BAG acknowledged that the German Code of Civil Procedure (Zivilprozessordnung, ZPO) does not fundamentally recognise an obligation to provide information on the part of the party that is not subject to the burden of producing evidence and the burden of proof. But it also pointed out that the employer was usually excusably unable to demonstrate or prove that the employee was employed elsewhere at all, nor could the employer provide information as to the amount of the other earnings. The BAG added that the employer was also excusably uninformed about the existence and scope of the suggested vacancies and unable to obtain the information necessary in a lawful, reasonable manner itself.

In particular, the possibility of indiscriminate surveillance of an employee by an investigator without any definite suspicion of severe misconduct was limited by data protection law. The Court then stated that the employer was also not able to provide any information about the vacancies suggested to the employee by the Federal Employment Agency and the Job Centre on the basis of the confidentiality of social data principle (Sozialgeheimnis) as per section 35 (1) German Social Code Book I (SGB I). There were no other legal options to obtain information available to the employer. Likewise, it was almost impossible for the employer to have any accidental knowledge of suggested vacancies in contrast to remuneration actually acquired elsewhere. The employee, in turn, could easily provide the required information without inadmissibly altering the situation in terms of producing evidence and providing proof in the proceedings. The employee was aware of the suggested vacancies and fundamentally had no contradictory interest warranting protection.

In conclusion, the BAG stated that the employer therefore had a substantive right to information which deviated from the principle and was derived from good faith. Without this the employer's ability to credit any money against the employee at least in terms of any earnings from other employment or potential job opportunities at third parties as envisaged by law would be practically non-existent.

The BAG also made it clear that it was diverting from its previous case law, according to which not even failing to register with the Job Centre as looking for work fulfilled the criterion of wilfully refraining from accepting work and the employee was not obligated to accept vacancies suggested by the Federal Employment Agency (cf. BAG dated 16.05.2000 - 9 AZR 203/99). This decision was handed down at a time when there were still no active cooperation obligations incumbent upon the unemployed. By now employees were, in accordance with section 2 (5) SGB III, requested to actively participate in avoiding or ending unemployment and were also obligated to personally report to the Federal Employment Agency as looking for work without delay after being informed of the termination date of the employment contract, as per section 38 (1) SGB III. The reporting obligation was also to be taken into account in the context of the provisions regarding deducting other earnings in the event of default in acceptance.

The decision of the BAG opens up new drafting options for employers to oppose an employee's claim for remuneration for default in acceptance after losing a dismissal protection process. The burden of producing evidence and the burden of proof for the amount to be credited against the employee as per section 615 sentence 2 BGB and section 11 KSchG continues to lie with the employer, however, for the first time a claim to information is now available to be used in the proceedings to demonstrate and prove that the employee wilfully refrained from employment elsewhere and to effectively enforce the amounts to be credited against the claim for remuneration for default in acceptance.

In order to reduce the risk of remuneration for default in acceptance, the employer should collate suitable vacancies and give these to the employee as soon as possible. As part of the dismissal protection process, the employee should then no later than upon expiry of the notice period of termination, if applicable also by way of counterclaim, be requested to inform the employer about the vacancies suggested by the Federal Employment Agency and the Job Centre stating the position, working hours, location and the renumeration in euros and the employee should be set a grace period in which to do so. In addition, the employee should also be asked to provide evidence of their registration as looking for work. This is because an employee who fails to register with the Federal Employment Agency and the Job Centre as looking for work and can therefore not have vacancies suggested to them should not be in a better position than an employee who did register as looking for work, but did not take advantage of the suggested vacancies.

In practice it has already been shown, that asserting a new claim to information is not only advisable to reduce the amount of remuneration in the case of default in acceptance, but also to put the employer into a significantly stronger negotiating position in the dismissal protection process. In the interests of prompt, cost effective resolution to the termination rights dispute, the employee's increased readiness to compromise may be of particularly noteworthy here for employers.

Downloads
Legal Update:New drafting options for employers to reduce the risk of paying wages for default in acceptance after notice of ter (152.87 KB)