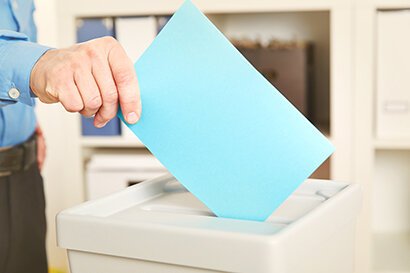 I. Appointing the Electoral Board and initiating Works Council elections

The preparation of Works Council elections commences with the appointment of the Electoral Board in accordance with sections 16 and 17 BetrVG, regardless of which electoral procedure is to be used. The Electoral Board will be appointed by the Works Council, if the company already has one. In other companies the Works Council Modernisation Act has now increased the protection provided to employees who carry out the preparatory measures to establish a Works Council. The respective employees are given the opportunity to make a certified public statement which states that they intend to establish a Works Council. If they do so, their employment contract may not be terminated for personal or behavioural reasons in accordance with section 15 (3b) of the German Protection Against Unfair Dismissal Act (Kündigungsschutzgesetz, KSchG) unless extraordinary termination is permitted. Even if it is questionable here how realistic it is that an employee who plans to establish a Works Council firstly makes a certified public statement, the protection against dismissal in conjunction with establishing a Works Council has been significantly extended.

This extension is compensated for to a minimal extent by the fact that the legislature has also lowered the minimum age to vote in Works Council elections so that in accordance with section 7 BetrVG employees are eligible to vote in the elections from 16 years of age.

In contrast to previous elections, the next Works Council elections will have to be conducted with notable changes for a number of companies. These changes should result in the elections being prepared for carefully and in good time as well as running as smoothly as possible.